You would think, this being my third build, that it would all go swimmingly.  Nope, just made different mistakes.  What have I learnt from those mistakes?  If I ever need to build another polytunnel, I’ll pay someone else to do it – preferably the lovely team at First Tunnels.

The previous weekend I got the battens in place around the door frames and timber base rail, creating a rebate for the plastic and space for another batten to hold it in place. 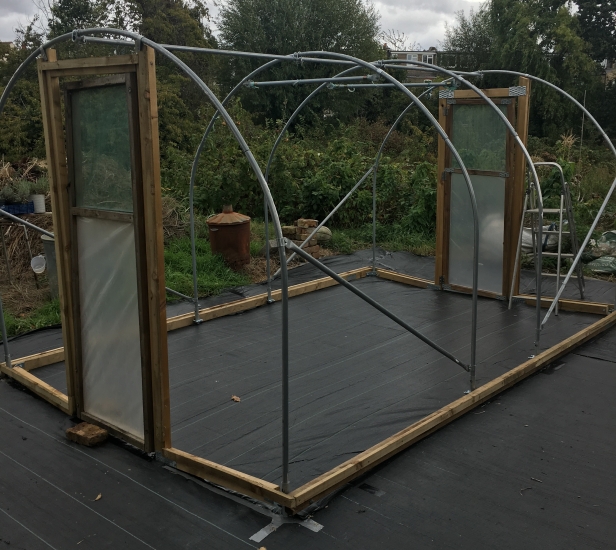 Anyhow, this Saturday the polythene slide gracefully into place with a helper on each corner and me in the middle hopping on and off the step ladder.

I’d had the foresight to pre-measure and cut the timber to hold the plastic in place at the doors and hammered nails into the battens for the timber rails.  Many hands etc..

One helper suggested using a staple gun the hold the pleated sheet around the door frames in plastic.  A genius suggestion; suddenly it was like having three hands.

As the base rails were about 7cm off the ground during fitting, pushing them down tensioned the plastic in a way that’s not possible by hand (not mine at any rate)

Even with the allotment ‘levels’, I think it looks pretty good.  It will be put to use for London Plot market operations.

Thanks to my helpers, Karen and Robert who gave up a few hours of their weekend to help out. 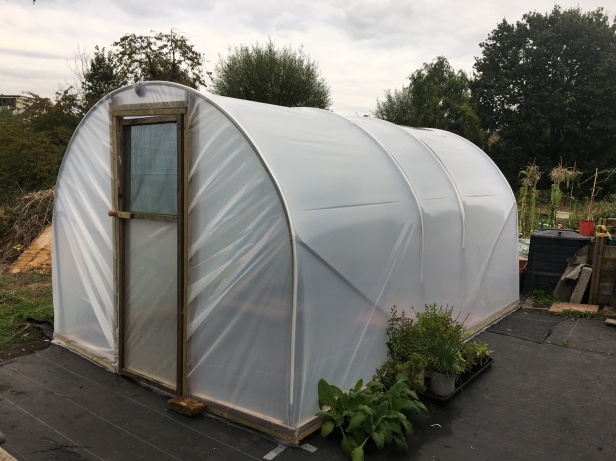 That really is all the space on plot now in use.  My plot neighbour has offered me the use of a 3m x 3m space adjacent to this tunnel – watch this space…