This has been a journey, complicated by dodgy foundations.  The lesson is never trust a man called Bob who says he can!

This Rudyard Kipling quote seems appropriate “Gardens are not made by singing ‘Oh, how beautiful,’ and sitting in the shade.”

The greenhouse structure was built in a day and the glass took another day but in between was some umming and arring about how to level the concrete base – cement was the answer.

Although the base was level it did mean quite a big step down into the greenhouse.  I scoured Freecycle for a few weeks and finally found a nice lady in Barnes who had a big pile of block pavers to recycle – I left with 180.

The next issue to resolve was the water leaking into the greenhouse.  I siliconed every join, gap and potential join or gap.  It leaked a little less.  Mr Plot suggested I use rubber based roof repair.  I could see the logic and painted the rubbery glop on the inside.  The flow reduced to a trickle and I was on a roll.  Another can covered the outside edge of the base.  Watertight!

A plot neighbour suggested I lay a damp proof membrane; I thought why not.  I considered 25mm insulating board too but could find no way to fit two 8×4 sheets in the car!

So with the DPM and 10 bags of sand, I laid the blocks with help from No.1 son.  We came back a few days later with a stone cutter to finish the fiddly bits – son was firmly in charge of that and I managed to not say anything about using power tools whilst wearing trainers (but did make him wear ear defenders and googles!) 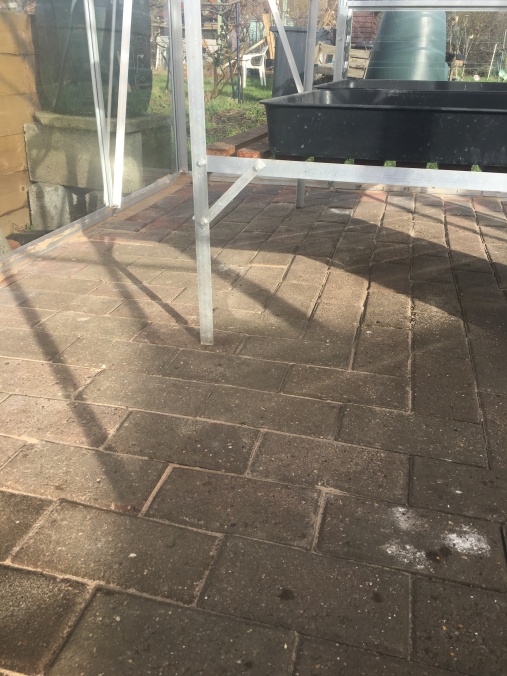 The greenhouse staging arrived from plot 34 the following day.  The next step was to insulate with bubble wrap, which is a curiously meditative activity.  I need to sort out access to the windows and vent.

And viola! Ready to go with some hardy seeds. 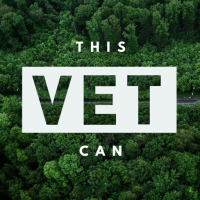 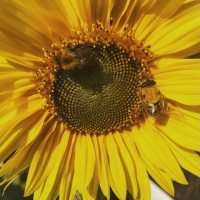 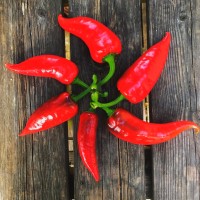